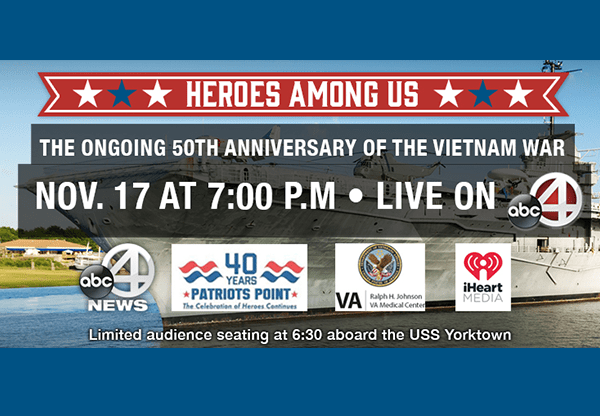 The program, “Heroes Among Us: The Ongoing 50th Anniversary of the Vietnam War,” will be broadcast from aboard the USS Yorktown and will feature an overview of the war told by Medal of Honor recipient Maj. Gen. (ret.) James Livingston and area Veterans’ stories of service and sacrifice. It will be moderated by Sinclair Broadcast Group’s Mark Hyman and ABC News 4 anchor Ashley Blackstone.

Free admission and seating will be offered on a first-come, first-served basis starting at 6 pm inside the Yorktown’s Smokey Stover Theater.

Radio listeners can tune in from 6 to 7 pm for a pre-show featuring the panelists on 94.3 FM (WSC).

U.S. Marine Corps 1st Lt. Clebe McClary (ret.) and LCpl. Alex Colvin will share their memories of Pfc. Ralph H. Johnson, the Medal of Honor recipient for whom the Charleston VA Medical Center is named. Johnson gave the ultimate sacrifice for his country, and in doing so saved the lives of his fellow Marines, including McClary and Colvin.

Vietnam Veterans who attend the event aboard the USS Yorktown will be presented with a Department of Defense Vietnam War 50th Anniversary Commemorative Pin for their service. The Ralph H. Johnson VA Medical Center will have representatives from the following programs available from 5:30 to 6:30 p.m. outside of the theater: Veteran Benefits Administration, Beaufort National Cemetery, Charleston Vet Center, VA Health Care Eligibility/Enrollment, Mental Health, Suicide Prevention, and the Medical Foster Home Program.