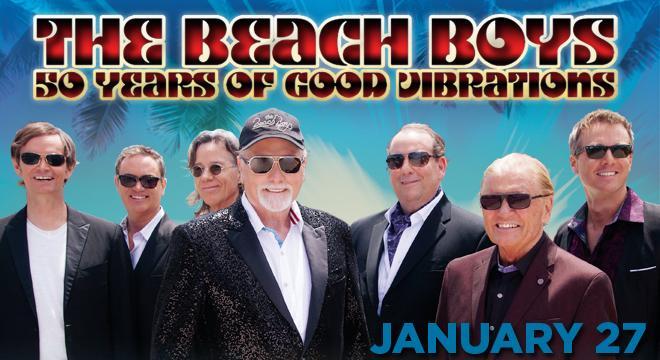 The Beach Boys, the surf rock group that dominated the 1960s, will play the North Charleston Performing Arts Center on Friday, January 27th at 7:30 pm. The performance will be part of the group’s “50 Years of Good Vibrations” celebration.


The band is known for numerous hit songs that have become anthems of American Youth. Some of their classic tunes are “Surfin’ USA,” “Surfer Girl,” “Fun, Fun, Fun,” “I Get Around,” “California Girls,” “Help Me Rhonda,” “Barbara Ann,” “Good Vibrations,” “Wouldn’t It Be Nice,” “Rock and Roll Music,” and “Kokomo.”

The Beach Boys have sold over 100 million records worldwide and have received more than 33 RIAA Platinum and Gold record awards. They are Grammy Award winners and members of the Rock and Roll Hall of Fame.

The group is led by Mike Love and Bruce Johnston, who are joined by Jeffrey Foskett, Brian Eichenburger, Tim Bonhomme, John Cowsill and Scott Totten.

Tickets for their North Charleston concert are will be available here staring at 10 am on Friday, September 23rd.


January is a little ways off, so enjoy a couple music videos to hold you over until then:

The Wood Brothers Play the Music Hall on 10/11