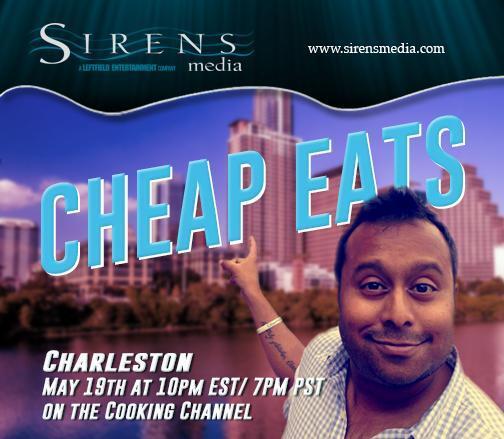 On Thursday, May 19th, Cheap Eats, a new show on The Cooking Channel, will air an episode featuring multiple Charleston restaurants.

Each episode features host Ali Khan attempting to find breakfast, lunch, dinner, and a snack in a designated city for less than $35. According to the show’s website, Khan’s visit to the Holy City started with “creamy grits topped with all the morning classics, then a crab cake sandwich that’s the talk of the town, followed by seafood-stuffed hushpuppies, and finally letting loose with a Carolina pulled pork dinner.”

Any ideas where he went? So far, Holy City Sinner can only confirm that Smoky Oak Taphouse in James Island will be featured. The restaurant said Khan stopped in January and enjoyed their pulled pork, rice and hash, and baked beans – all for under $10.

The Charleston episode of Cheap Eats will air at 10 pm on Thursday. You can find The Cooking Channel on channel 122 on Comcast, 232 on DirecTV, and 113 on Dish Network.

Holy City Sinner Featured on “I Love This Buzz” Podcast