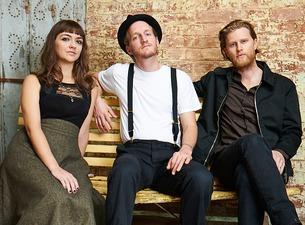 Three years after their last appearance in Daniel Island, folk rock band The Lumineers will perform at the Volvo Car Stadium on Saturday, September 17th at 7 pm.

The group is best known for their self-titled debut album, which was released in 2012. The record peaked at No. 2 on the Billboard 200 and earned platinum status. The album included the smash hit single “Ho Hey,” which reach No. 1 for 18 non-consecutive weeks on the Billboard rock songs chart. The group was also nominated for two Grammy Awards in 2013.

The band will be touring in support of their sophomore album, Cleopatra, which will be released on Friday, April 8th. You can learn more about the album and/or pre-order it on the group’s official website.

A review and the setlist from their 2013 show can be seen here.

Tickets for this year’s Daniel Island concert go on sale on Friday, April 8th at 10 am. The Volvo Car Stadium was previously known as the Family Circle Stadium.

Follow us
Related Topics:the lumineersvolvo car stadium
Up Next