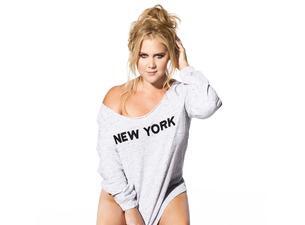 
Schumer has had a pretty incredible year – she wrote and starred in the movie Trainwreck; won an Emmy for her TV show Inside Amy Schumer; released Amy Schumer: Live at the Apollo; and hosted Saturday Night Live.

The comedian is the creator, star, writer, and executive producer of the Emmy and Peabody Award-winning Inside Amy Schumer, the popular Comedy Central series which premiered in 2013.  The show’s fourth season premieres next year.

Schumer has also been seen on TV shows like the Roast of Roseanne, Roast of Charlie Sheen, Louie, Girls, and Curb Your Enthusiasm.

Her first book was recently purchased by Gallery Books and is scheduled to be released late this year.

Tickets for her North Charleston show are already on sale this Friday.