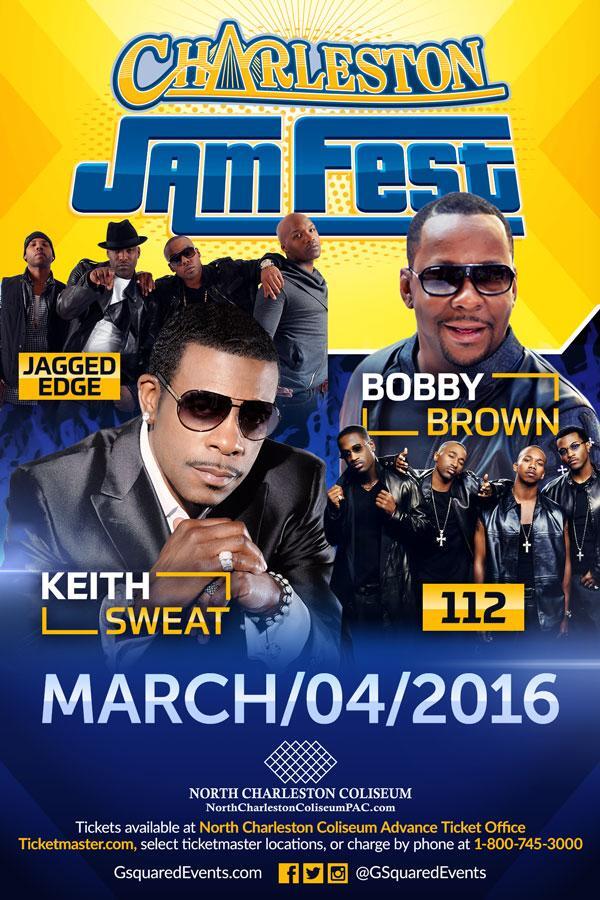 The Charleston Jam Fest will return to the Holy City on Friday, March 4th at 8 pm. The concert will held at the North Charleston Coliseum.

This year’s lineup features R&B singers Keith Sweat, Bobby Brown, Jagged Edge, and 112. Tickets are already on sale and can be purchased here.

Keith Sweat’s career started in the mid-70s and included seven straight albums that all went at least platinum. He is best know for songs like “I Want Her,” “I’ll Give All My Love to You,” “Twisted,” and “Nobody.”

A former member of New Edition, Bobby Brown also found success as a solo artist. He is best know for the single “My Prerogative,” which earned him a Grammy nomination.

Atlanta R&B group Jagged Edge is best known for the 2000 album J.E. Heartbreak, which went double platinum and spawned three Top 20 singles. Those songs are “He Can’t Love U,” “Let’s Get Married,” and “Promise.” They are also known for the 2001 single “Where the Party At.”

112, a group that also hails from Atlanta, are best known for the songs “Only You”, “Anywhere,” and the Grammy-nominated single, “Peaches and Cream.”

Styx to Play the Volvo Cars Stadium in May

“Invincible: A Glorious Tribute to Michael Jackson” Thrills the PAC on 2/11