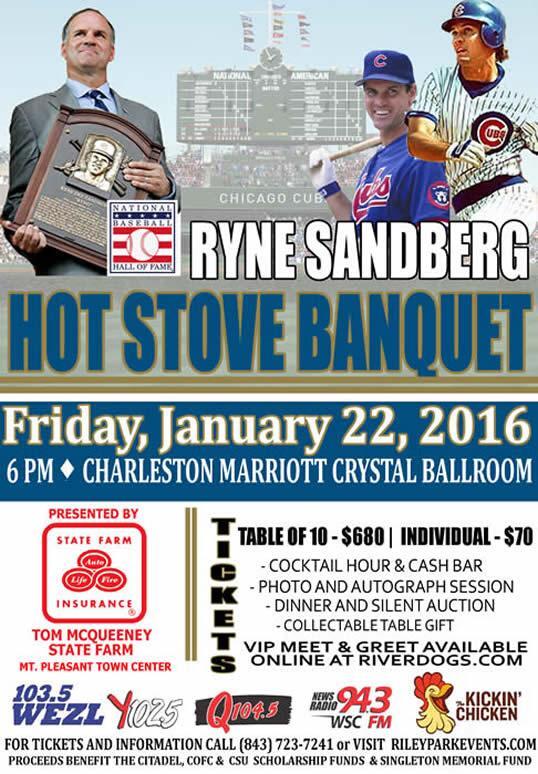 Since 2005, the Charleston RiverDogs organization has held an off-season Hot Stove Banquet & Auction featuring some of the biggest names in baseball. The 12th edition of the event will be no different as Hall of Fame second  baseman Ryne Sandberg will be this year’s featured speaker.

The banquet will be held on Friday, January 22nd at the Charleston Marriott’s Crystal Ballroom. During the event, the former Chicago Cubs infielder and Philadelphia Phillies manager will share behind-the-scenes stories, answer questions, and pose for pictures with attendees.

It will begin at 6 pm and tickets are $70 per person (tables of eight with preferred seating are $680). Admission includes dinner, a table gift and an autograph or photo opportunity. Proceeds from the Hot Stove Banquet benefit The Citadel, College of Charleston and Charleston Southern baseball programs in addition to the Singleton Memorial Fund.

The Singleton Memorial Fund is in memory of Chris Singleton’s mother, Sharonda Coleman-Singleton, who was one of the nine individuals killed on June 17, 2015 at the Mother Emanuel AME Church. Chris is a member of the Charleston Southern baseball team, and funds will be used to meet Chris’s educational expenses. Any remaining funds will be applied to the planned CSU Baseball enrichment center in memory of his mother.

Earlier that afternoon, the RiverDogs will also host a Meet & Greet with Sandberg. There will be weekly opportunities for fans to bid on tickets on riverdogs.com.

Here are some of Sandberg’s career highlights: