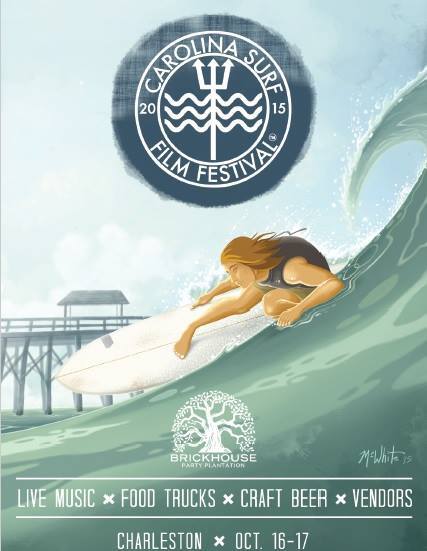 The 2nd Annual Carolina Surf Film Festival will be held from October 16th until the 178th at the Brick House Kitchen in James Island.

This year’s event will include five feature films
and ten short films featuring all styles of surfing and surf film-making.  The festival will also feature food, beer, giveaways, vendors, live music, an awards ceremony, a silent auction and more. The auction will benefit Surfer’s Healing, a nonprofit that brings surfing it children with special needs, specifically those with autism.

The festival will run from 5 pm until midnight on both days and a variety of ticket options are available. One such option is the “Trident Pass,” which includes entry on both days, a Mex1 Taco Basket each night, a beverage, access to the VIP area, a festival t-shirt, a schwag bag, and access to the Thursday, October 15th festival launch party at Chico Feo.

This year’s films include:

Short Films
● “The Fisherman’s Son” by Chris Malloy and Patagonia, from Ventura, California.
● “El Chino” by Max Esposito, from Boston, Massachusetts
● “GIRL GO BIG!” by Mediafisch, from Zurich, Switzerland
● “Making My Own Board” by Dylan Pegg, from Devon, England
● “Between Roses & Thorns” by Peregrinus, from Lisbon, Portugal
● “Changing Tides” by Hyperion Productions, from Portland, Oregon
● “Fathoms Of Consciousness” by Red Vault Productions, from Patchogue, New York
● “Salty Air Stare” by Garrett and Mary Spencer, from Satellite Beach, Florida
● “Mute” by Viktor Pakpour, from Los Angeles, California
● “Home” by ACL Productions, from Paia, Hawaii

For more information, or to purchase tickets, visit the festival’s website.

Follow us
Related Topics:brick house kitchenCarolina Surf Festival
Up Next

How To Help SC Flood Victims