Multiple news outlets and city departments are reporting that a shooting occurred at the Emanuel African Methodist Episcopal (AME) Church at 110 Calhoun Street. Officials have said multiple people are wounded.

The shooting happened around 9 pm and the suspect is still at large.

The rest of the details are pretty sketchy at this point. Check back for updates.

10:31 pm – Charleston Police say the suspect is a white male, 21-years of age and wearing a grey sweatshirt, a hoodie, blue jeans, timberland boots. He is also clean shaven.

10:43 pm – Despite reports from some national/regional sources, none of the local media on the scene have confirmed the number of fatalities.

11:01 pm – A person fitting the description of the suspect was taken into custody, but the Charleston Police have said they are still searching for the suspect.

11:09 pm – Holy City Sinner has heard from a source close to the Charleston Fire Department that said the reported number of 8 dead is accurate, but there are more people that have life-threatening injuries.

11:29 pm – Press conference delayed due to what Charleston Police have called an “immediate threat.” Melissa Boughton of the Post & Courier said it was a bomb threat at the Courtyard Marriott.

Charleston Police have refuted this report.

11:43 pm – Multiple news outlets are reporting that SC Senator and Pastor Clementa Pinckney was at the Emanuel AME Church during the shooting.

12:01 am – ABC News 4 just reported on air that the Rev. Clementa Pinckney (he’s also a state senator) and his sister were shot. No word on their conditions.

12:16 am – Still no OFFICIAL confirmation on the number of causalities.

12:21 am – Jeb Bush has canceled tomorrow’s scheduled appearance in the city.

12:44 am – Pastor Tory Fields said on ABC News 4, “There are 9 people dead in that church.” He wouldn’t say how he knew that, but stood behind statement.

12:46 am – SC Governor Nikki Haley posts a statement on Facebook.

12:47 am – WCBD is reporting that State Senator and Rev. Clementa Pinckney is among the dead in mass church shooting.

12:51 am – Charleston Police say nine people have died in the shooting. Eight were found dead in the church, one died at MUSC. There were some survivors too, but no number was given.

1:01 am – Charleston Police Chief Mullen says bomb threat is over. Says people should stay in their homes, stay calm, and avoid the crime scene area.

3:00 am – The Charleston Police’s next scheduled press conference is at 7 am.

3:49 am – Dot Scott, president of the Charleston NAACP, told the Post & Courier that the gunman told one woman he was letting her live so she could tell everyone else what happened.

Family members gathered at a nearby church told ABC News 4 that a 5-year-old survived the shooting by playing dead. Family members were also told that the gunman briefly attended the service before opening fire. 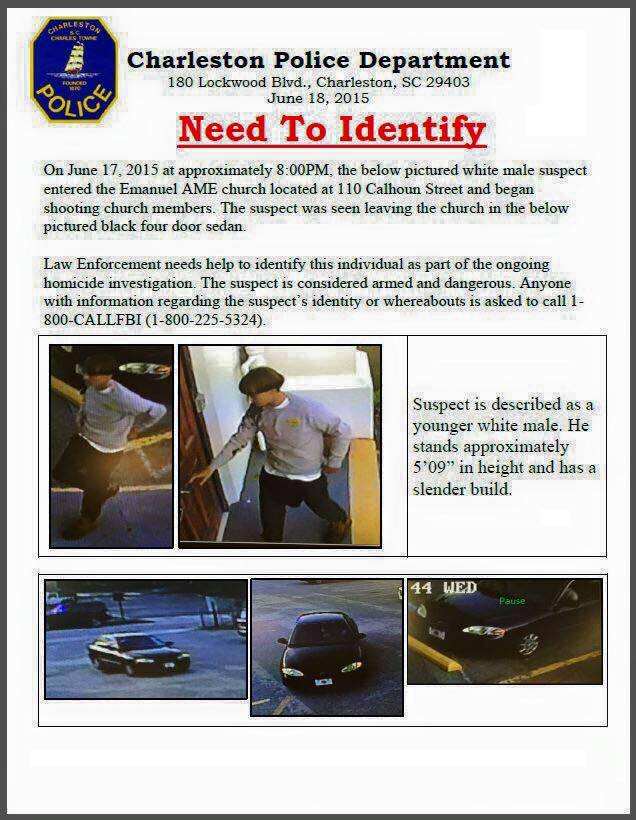 7:11 am – Charleston Police say the victims were 3 males and 6 females.

7:15 am – Police say the suspect was in the church with the prayer group for about an hour before he opened fire.

Police have no indication on where the suspect may be.

7:42 am – Police have released more photos of the suspect and the vehicle he drove.

7:57 am – Gov. Nikki Haley has called for flags to be flown at half staff.

10:09 am – The suspect’s identity has been confirmed. He is 21-year-old Dylann Roof from Lexington County. He is currently out on bond after recent arrests on drug, trespassing charges. Call 1-800-225-5324 if you have info on his whereabouts.

10:24 am – Reuters has spoken with Roof’s uncle who told the network:

His nephew is “quiet, soft spoken.”
Uncle says Roof was recently given a .45 caliber pistol as present

10:30 am – ABC News 4 says the license plate number for the suspect’s car is LGF 330 and is South Carolina tag. The car is a black Hyundai.

3:15 pm – The Charleston County Coroner identified the names of all nine victims.

Five members of coroner’s staff worked through the night to process the crime scene.