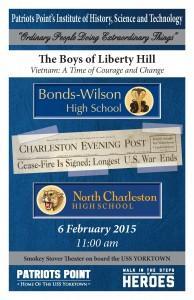 This Friday, the Patriots Point Naval and Maritime Museum will host a symposium featuring discussions on the history of North Charleston’s Liberty Hill community and its estimated 60 African-American men who left to fight in the Vietnam War.

The Black History Month event, The Boys of Liberty Hill, is free to attend. They sumposium will begin at 11 am in the USS Yorktown’s Smokey Stover Theater. If you cannot be there in person, the event will also be streamed through the Patriots Point Livestream channel.

The symposium with feature three guest panelists from Liberty Hill:

Follow us
Related Topics:black history monthpatriots point
Up Next