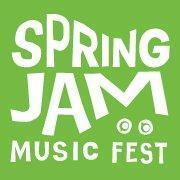 With the 3rd Annual Spring Jam Festival just over two months away, we finally have our first band confirmations! The initial lineup includes Ed Roland & The Sweet Tea Project, Lefty at the Washout, The Travelin’ Kine, The High Divers, and The Missing Link dance crew.

Here’s a little bit of info on each of these acts:

This year’s Spring Jam Music Fest will be held at The Grove at Patriot’s Point on Saturday, April 18th 2015. Click here for ticket information.

Follow us
Related Topics:spring jam music fest
Up Next