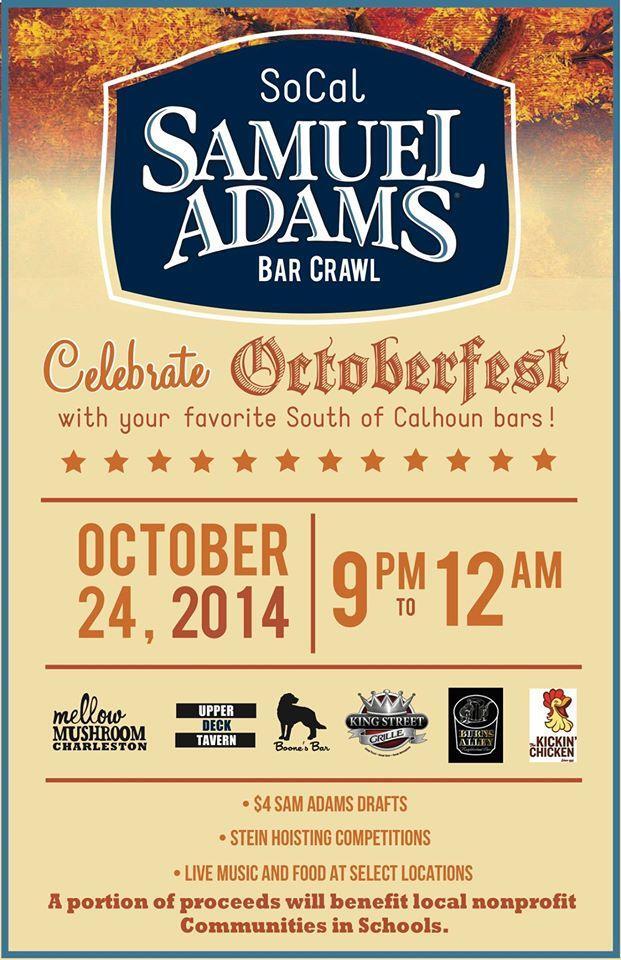 This Friday from 9 pm until midnight, King Street restaurants and bars that are south of Calhoun will take part in the Sam Adams OctoberFest Bar Crawl. The event will include multiple Sam Adams drafts, Stein Hoisting competitions, live music, and small bites. The crawl will benefit the local nonprofit Communities in Schools. There is no admission fee.

Participating restaurants/bars include Boone’s, Burns Alley, Kickin’ Chicken, King Street Grille, Mellow Mushroom, and Upper Deck Tavern. Crawlers will be able to try a different Sam Adams brew at each bar for $4.
Each location will also hold a Stein Hoisting champion with the winner at each bar meeting back at Mellow Mushroom for the winners’ challenge. The overall champion will win a three foot ceramic Sam Adams stein.
At the conclusion of the event, the first 10 people at each location can trade in their passport for a free bar crawl t-shirt.

The live music lineup is as follows:

As previously mentioned, a portion of crawl’s proceeds will benefit Communities in Schools, a local nonprofit dedicated to dropout prevention and increasing graduation rates in the Charleston community.

For more information on the event, visit the Facebook event page.