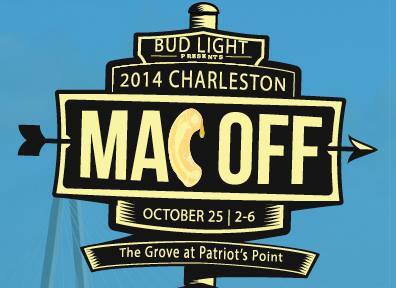 It’s the return of the Charleston MAC OFF! The event, now in its 5th year, features multiple Holy City restaurants battling it out for the title of Best Macaroni & Cheese! The 2014 MAC OFF will be held at The Grove at Patriots Point on Saturday, October 25th from 2 pm until 7 pm.

Besides all the yummy mac & cheese, there will also be live music, local vendors, a photo booth, a kid’s area, a mac & cheese cooking demo by Southern Season, a mac & cheese-eating contest, and more. Live music will be provided by Jared Blake from The Voice and local band Adalya. Plus, one local resident’s dish will be entered into the competition. If you would like to participate, click here.

Attendees will have the chance to try all of the mac & cheese varieties and vote for their favorite. A panel of celebrity judges will also choose their favorite for the Critic’s Choice Award. In total, three awards will be given out – the aforementioned People’s Choice and Critic’s Choice awards, and Best Mac and Cheese: Using a Local Ingredient.

Tickets are $10.00 and can be purchased online or at the door. Food, beverage, and mac & cheese tasting tickets are sold for $1 at the event. A portion of the proceeds will be donated to Lowcountry Local First. For more information about the MAC OFF, visit the official webpage.