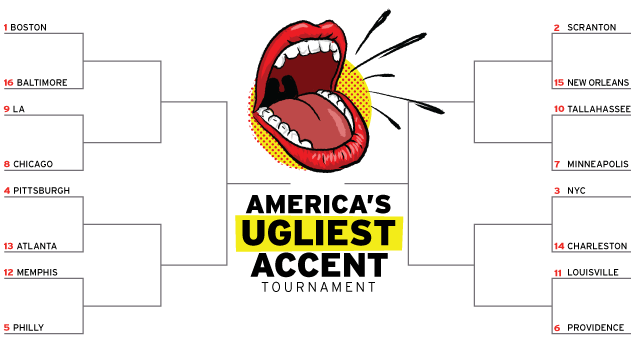 The folks at Gawker – bless their hearts – are running an “America’s Ugliest Accent” tournament and the sweet-as-honey Charleston accent is inexplicably included.

A total of 16 cities were chosen and then seeded for a head-to-head-style tournament. Each match-up’s winner…which is really its loser…is determined by an open vote.

Charleston was chosen as the 14th seed and will face the 3rd-seeded New York City accent in the first round. Voting begins tomorrow.

The tournament began on Monday and has already seen the Boston, Chicago, Scranton, and Tallahassee accents advance into the second round. Today’s match-ups are open for voting and include:

You can learn all about the tournament here.