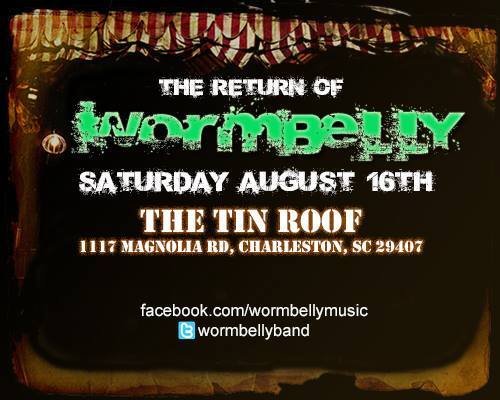 Wormbelly, a local rock group that disbanded in the mid-2000s, will play their first show in 8 years on Saturday, August 16th at the Tin Roof in West Ashley.

The band, which formed in 1997, had a lot of local success despite a few lineup changes. They sold out the Music Farm for their first CD release show and tallied a couple Charleston City Paper awards after their second album came out. They also released a DVD film and played hundreds of shows throughout the Southeast.
Wormbelly parted ways in 2005, but last performed in 2006 when they played a reunion show at the Music Farm. After reconnecting through social media and playing together over the last year, the band decided to make a comeback.
Their show at the Tin Roof will start at 9 pm. You can listen to some of Wormbelly’s music below.
–
Sell music on Amazon at ReverbNation.com