By: Prisha Hertzler from Rock n Roll Feedback
Listen while you read: 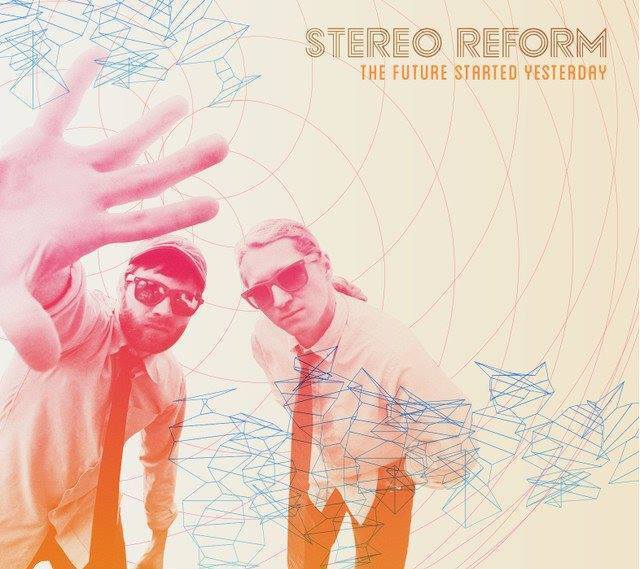 Greenville duo Stereo Reform has been getting a lot of attention lately, from a major electronic drum endorsement and high honors at the Music Video Asheville Awards to getting their own Pandora station and participating in an innovative music and graphic arts festival later this summer. They are bringing their “Dance-a-Funk-a-Rock-a-Tronic” sound to The Pour House this Saturday, July 19th ($8, doors at 9 pm), and took some time to talk with us about what it’s like to be an electronic band in the folk-heavy South.

Rock n Roll Feedback/Holy City Sinner: Big things have been happening for Stereo Reform lately. The group was recently endorsed by electronic drum company Pintech USA, and Stereo Reform now has its own station on Pandora Radio. Tell me about the process for getting onto Pandora, and what this and the Pintech endorsement mean for the group.
Stereo Reform: The process of being considered for Pandora starts with a simple submission. We submitted our album, The Future Started Yesterday, in late 2013. They reviewed the album and in a very short time (around six weeks), accepted our submission! This is very rare given that we aren’t on a label and are nearly completely independent. We were very excited. A musicologist then picked our songs apart (which took a few months), looking for 450 specific features and then put us out there. Being on Pandora is extremely beneficial to a band like us because we could pop up on an untold number of other, more established artists’ stations. Giving us a thumbs up tells Pandora to have us pop up on even more stations, more often! It’s exciting to see Prince, Red Hot Chili Peppers, Capital Cities, Daft Punk and more pop up on our station.

Pintech USA is the premiere company for electronic drums, kits, cymbals, pads and more. They sponsor drummers for the likes of Elton John, Nine Inch Nails, ZZ Top, No Doubt, Hootie & the Blowfish, Beyonce and many more. A few months ago, they made it known that they liked what we are doing and appreciated our sound to the extent that they chose to sponsor us. It’s an honor to be included on a roster that can claim such successful and talented artists. From here on they will help us continue to “up” our live electronic percussion possibilities. Anyone that has seen us live knows we love to have a 3-man drum solo at least one time per show… Pintech is about to help us turn it into something very, very special. We are excited about our future working with them.

Stereo Reform’s most recent album, The Future Started Yesterday, was released in May of 2013 after a successful Kickstarter campaign. All of the tracks are available on the group’s website for a “name your price” download. Did you decide on this option as a way to give back to the fans for helping with the Kickstarter, or was there another motivation?

The decision to go with “name your price” is really a “Thank You” to everyone that loves music in general. On iTunes you can get our album for around ten dollars, but offering it for whatever you feel on our site will hopefully drive more folks to purchase from us directly, which can increase their interest in us as a band and as people. If you only have one dollar and want to buy music, that dollar is just as good as any other amount. Music is ultimately priceless and if a price has to be put on it, we would rather the consumer do so in a way that makes the most sense for them…even if that price is zero. We don’t mind giving our music to anyone willing to listen. By lending an ear to what we have to offer, they are gifting us just as much as we are them.

Do you guys write songs together or is there a main songwriter?

We don’t ever complete a song without consulting one another. We will both have music ideas and may write or record some, half, or most of a song, but before it’s said and done we both add our own ideas to make it a Stereo Reform song. Lyrically, the dynamic has always been that Neil handles that…so in that sense, there is kind of an established lyricist, but both Will and Neil seal up all songs together.

The Future Started Yesterday has been getting a lot of attention. It was one of the big winners at the Seventh Annual Music Video Asheville Awards, with your self-produced video for “Fire” winning the People’s Choice award and Best Editing award. Tell me about that experience.

“Fire” was a project that took several months of writing and preparation. Shooting and post-production took a total of three more months. Since it was a self-produced video, there was a huge amount to be done by only a couple people (just check out the credits). Once it was finished we had a release party and took a few days to relax. We submitted to the MVA Awards and were accepted. We showed up to red carpet treatment which was neat. After screening the videos, the voting took place. Once the awards started going out we were nominated for several…Best Cinematography, Best Song, Best Wardrobe and Best Editing. After we won Best Editing, which was a big honor because it was a beast to edit, we thought that would be the end of us receiving awards, but it wasn’t. We won People’s Choice which was the top honor and came with a cash prize. It felt so good to walk up there and thank everyone. It was a very reassuring experience. We felt like we aren’t crazy for doing what we do. And it created excitement for the future. What will the next video be like? It felt wonderful. This was our first real attempt at making a video and we learned a great deal. We have also been accepted to the Sprockets Music Video Festival in Athens, Georgia! They will be showing “Fire” at the 40 Watt this Friday night, July 18th. We are, again, very honored to have been selected to take part in such an event.

When people talk about the Southeast music scene, most think of the folk and Americana acts that have been gaining in popularity – and number – in recent years. But there is also a rising tide of electronic and experimental pop music, such as Michael Flynn and Mechanical River, and of course Stereo Reform. What has your experience been like when you play in cities such as Charleston, Charlotte, Atlanta?

The experiences are varied, but the response is usually positive. It seems that many cities have particular venues that cater to music more in line with what we do. A great number of venues do have primarily rock, country, cover and Americana acts, but then there are those that are more diverse. There, we seem to always make new fans and friends. We would love to play those places more often. Many of the venues that embrace what we do are also higher profile and book more national and international acts, which means it’s tougher to get on the bill, but not impossible by any means. The Pour House is one of those places and we absolutely love it and Alex (Harris, Owner of The Pour House) for all they do to promote social and musical diversity.

What are the Top 3 favorite venues that Stereo Reform has played? What are the group’s Top 3 “Wish List” venues?

We love playing Fly Me To The Moon Saloon in Telluride, Colorado (phenomenal venue and town); it was great playing the Whisky A Go Go in Hollywood (mostly for its rich history); and The Pour House will always be a favorite venue for us. Man…Wish List venues… Well, Red Rocks is definitely on there. The Tabernacle would be great. The Brooklyn Bowl would be awesome as well. But big festivals are kind of the top of our dream list at the moment.

How did you enjoy performing at last month’s Solust Music Festival? I understand the group will also be performing at Nershfest in August, an all-streaming graphic arts festival. What are you looking forward to at Nershfest, and how do you anticipate that experience being different from Solust?

Solust was a lot of fun. The production for the event was top notch. I could see it becoming a very big draw for Charleston in years to come. Nershfest is super unique. It’s a streaming music festival, first and foremost…so it’s basically a giant party with music split into “sets”, just like a festival would be. They added in the visual arts element and are ultimately trying to achieve a full festival atmosphere. If it continues to do well it will likely become a full-on live music festival at some point. We are happy to be a part of something so unique. They reached out to us and we feel we have made a strong positive connection with the production team. We can’t wait to see how it goes!

Musicians often cite their favorite or most influential artists; instead, we would like to know what are some of your guilty listening pleasures?


This is a great question! So these are pretty much artists you might jam out to in your car until you come to a red light…and then quickly mute or change it up. For Will, it would probably be…Katy Perry. Lady Gaga. Iggy Azalea. “Fuck her for putting out the ‘Fancy’ song,” Will says. NKOTB! Kenny Loggins…

For Neil, some are…Katy Perry. Snow. “Informer…a ticky toky bicky boom a bayo, a licky boom boom down!” Wham! actually had some good tunes! Michael McDonald. Some Madonna. Devo. Even some Cranberries. Bruno Mars is definitely on the list as well…I’m just gonna go ahead and say that little dude is damn good. Guilty pleasures are always a good time!

Follow us
Related Topics:rock n roll feedbackstereo reform
Up Next