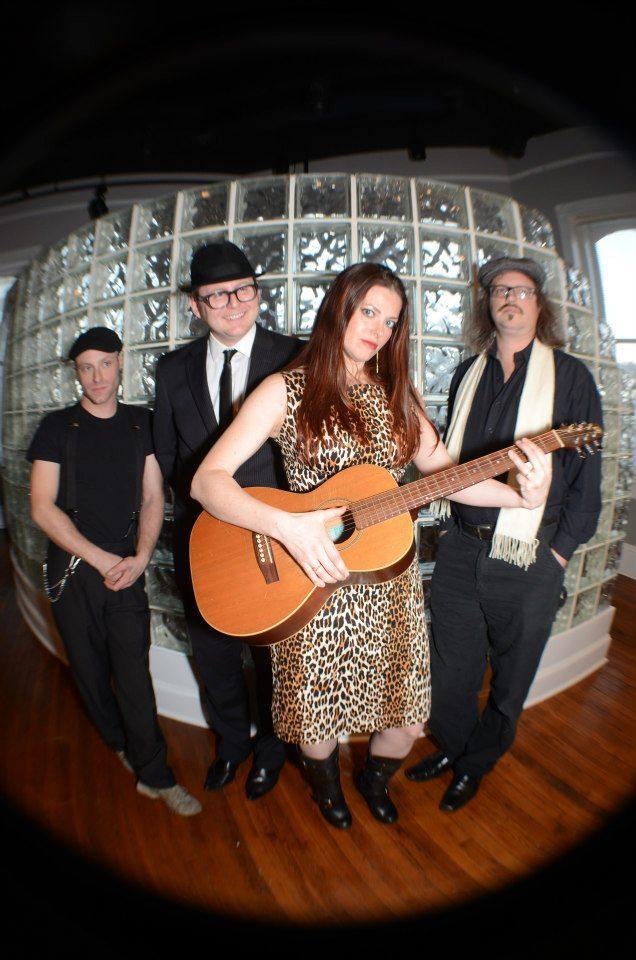 Hailing from the hills of Asheville, Red Honey is an electrifying 4-piece and they’re kicking off a string of Charleston shows this week with a performance at the Awendaw Green Barn Jam on Wednesday, June 25th.

A little bit country, a little bit rock n roll, Red Honey is led by fiery front woman Erika Jane, who has been making a name for herself across the Southeast as a bold and bluesy torch singer. Brad Pope (lead guitar), Jarrod Perkins (drums) and JP Hess (bass) fill out the sound, which the band has described as “the secret love child of Johnny Cash and Grace Slick.” The foursome recently ordered a second pressing of their debut EP, Red Honey and the Pleasure Chest, and took time out of their busy schedule to talk with us and answer a few questions.

R n Roll Feedback/Holy City Sinner (RnR): Is this Red Honey’s first Charleston show? If not, how often does the band get to Charleston, and how did you get hooked up with the Barn Jam?

Red Honey: This isn’t our first Charleston show. We aim to get to Charleston about every three months or so. We were introduced to Eddie White and Wade Malloch [with Awendaw Green] by our friend and musician, Pierce Edens. He spoke really highly of how much love and community surrounds Awendaw Green Barn Jams and how well they are put together. They have been incredible to us. Coincidentally, our lead guitarist Brad Pope mowed the lawn there for years before the Jams began.

The band’s website states that the first Red Honey EP has been recorded and mastered; has an anticipated release date been set? Where will fans be able to purchase and/or download the EP?
We actually did a very quiet release of our album, Red Honey and the Pleasure Chest, in October of last year. We only sold the albums at shows, not digitally at all – an underground release as we’ve been entertaining the idea of signing to a label… We sold out of albums in three months,…just ordered more, and will have them for sale at these shows. (The EP) will most likely be online and available for download in the new moon, but we’ve got to check on Mercury before we make any commitments…to anything online, that is.

There has been a big boom of strong female singers emerging from Charleston (Rachel Kate, Jordan Igoe, Lily Slay, Lindsay Holler – to name a few) How are things in the Asheville community?
We’ve heard good things about the women of Charleston. We’ve seen a girl named Danielle Howle when we’ve been [here]. She could howl. I wonder if she knows Lindsay Holler!? Asheville…is very much a community and there are some amazing ladies. Every year, we put on a festival (DIGFest) that showcases the very best of what is emerging out of the Asheville music scene. Last week, we released this year’s line up (check it out at www.digfestivalasheville.com)! It takes place on August 22nd and 23rd this year.

The Southeast circuit has grown to be very supportive of its regional sister cities and touring acts.  What are the best things about going on tour? What are the worst?
The best things about going on tour? We love the people you meet and the adventure of the road. Just last week we met a Wildman named YaYa who had all sorts of wisdom from his years of catching trains that he wanted to share with us. We would also like to note that we’d love to have a Bigfoot encounter. It’s a goal and it drives us. Gas station impulse buys are a good part, too. The worst? JP never wants to stop to let anyone pee while we’re on the highway.

Do you guys write together as a band, or is there a main songwriter among the group?
As of right now, Erika is handling the brunt of the pen duties. And she does a fine job at that. I think Erika not only has a unique flavor for words, but also the decisions she makes in the construction of her songs really starts to pile up the goodness. We’re working on new material, though, and we’re excited to see what we’ll come up with. We have a saying in the band, “Gunna Get ‘Em Wild”, and it is certain that we will continue to keep that idea in the forefront of the process.

What are the Top 3 favorite venues that Red Honey has played? What are the band’s Top 3 “Wish List” venues?
Top three? We’ve played? That’s hard. Umm…probably Snug Harbor in Charlotte (Benji Hughes played with us), the Orange Peel in Asheville and the Barn Jam at Awendaw. I love miniature animals and pygmy goats run amok there…but there’s so many shows that have been wildly amazing for all sorts of different reasons. Wish list? Well, we’re proud to play any place they’ll have us! I would definitely put Red Rocks on the “Wish List” though….and  maybe on a big ass boat. Or a Virgin mega plane. Or anywhere in Europe or Japan.

Singers and musicians often cite their favorite or most influential artists; so instead, we would like to know what are some of your guilty listening pleasures?

You can catch Red Honey around Charleston this week at the following shows:

Follow us
Related Topics:red honeyrock n roll feedback
Up Next

The Milk Carton Kids & Sarah Jarosz to Collaborate at the Music Hall this Oct.