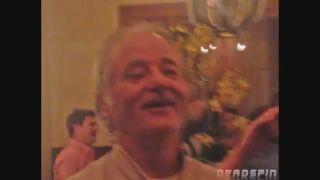 According to the back story, a group of friends were in Charleston this past weekend to celebrate and ended up at Oak Steakhouse. One of the party-goers noticed Murray was also in the restaurant and tried to coax the actor into joining the party. After initialing declining, Murray ended up chatting with the group.

For the full story and the video, check out Deadspin’s post. For even more comedy, be sure to look at the comment section where a commenter took exception with Deadspin’s decision to not specify which Charleston was being referenced in the story. Needless to say, many folks did not share his opinion.

The City Paper’s take on the video can be found here.