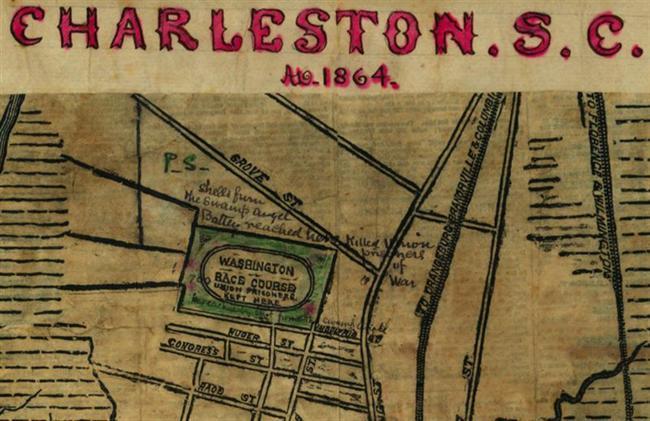 Map Showing the location of the Race Course
Credit: bradleylail.com

Did you know that Charleston is considered to be the birthplace of Memorial Day? On May 1st, 1865, in what is now Hampton Park, history was made.

During the Civil War, Union soldiers were held as prisoners at the Washington Race Course (present day Hampton Park). Hundreds of those prisoners died in the prison’s poor conditions and were buried in unmarked graves on the property. Once the war ended, former slaves dug up the soldier’s bodies and re-buried them in an effort to give them a proper funeral.

Multiple publications state that on May 1st, 1865, around ten thousand people (former slaves, children, Union troops, preachers, and northers) went to the course to pay their respects. The ceremony included a parade, speeches, and the decoration of the graves with flowers, which led to the day being called “Decoration Day.” Similar events were created throughout the nation but remained separate for years due to the continuing tensions within the country.

As you probably realized, the graves are no longer in Hampton Park. The soldiers were reinterred at the Beaufort or Florence National Cemeteries or their hometowns. A plaque now sits in Hampton Park to designate the event.