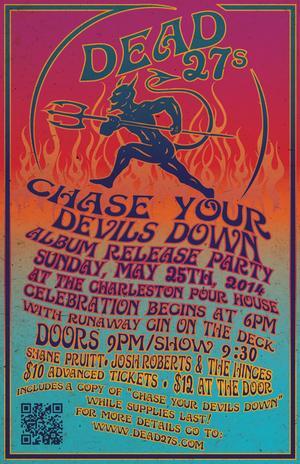 The Dead 27s will officially celebrate the release of “Chase Your Devils Down” with a concert on Sunday, May 25th at the Pour House. Josh Roberts & The Hinges and Shane Pruitt will also be performing.

The Dead 27s have notched numerous honors over the last two years. Their awards include:

Tickets to the CD release show are $10 if purchased in advance or $12 on the day of the show – either way, a copy of the CD is included in admission.

Doors open at 9 pm. Runaway Gin, a Phish tribute band, will play a free show on the deck at 6 pm.

In the run-up to the show, the band is offering some sweet packages and auction items to help them purchase a touring van. Check out the goods here.