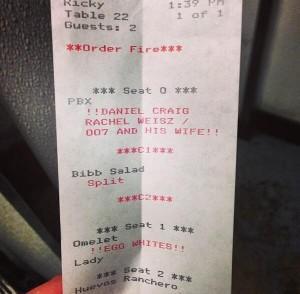 In case you missed it – the Holy City was buzzing throughout the weekend due to the appearance of actors Daniel Craig and his wife Rachel Weisz. The couple was spotted throughout the downtown area over Craig’s birthday weekend (he turned 46 on Saturday).

Their rumored activities include: Halls Chophouse and the City Market on Saturday night, Muse, Bowens Island, and The Macintosh. A receipt from the latter even turned up on social media. As for actual photographic proof of the couple, this is the only one that has surfaced thus far.

Craig is best known for being the most recent actor to play the title character in the James Bond franchise, but he has also had starring roles in popular films like The Girl with the Dragon Tattoo and Munich.

Meanwhile Weisz is probably best known for her Academy Award-winning performance in 2005’s The Constant Gardener. She also appeared in The Mummy, The Mummy Returns and Oz the Great and Powerful.

Meet the Cast of “Southern Charm”