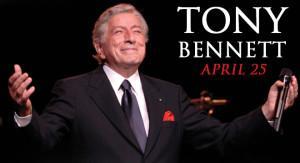 Bennet, whose music career has spanned over six decades, plans on releasing his latest album, Bennett & Brubeck: The White House Sessions 1962, on May 28th. The CD is a live recording of a joint performance with Dave Brubeck held near the Washington Monument.

The album will likely be another hit for Bennett who has amassed multiple platinum and gold albums, not to mention tallying 24 Billboard Top 40 songs.

Tickets, which start at $67.50 (before taxes and fees), can be purchased beginning this Friday at 10 am.

An Internet pre-sale begins tomorrow at 10 and runs until Thursday at 10 pm. To take advantage of the early sale, you’ll need to use the internet pre-sale password: TBCHR