***UPDATE, 4:46 pm*** – After a six-hour closure, the south side (Mount Pleasant into Charleston) is open again. The other side will open in 15 minutes if all goes well.

Another interesting note – the SCDOT’s cameras located on the bridge were removed from their website during the bridge closure and reappeared when the bridge was reopened. The department told The Post & Courier’s Andrew Knapp that the issue was on the public’s end. Hmmm.. 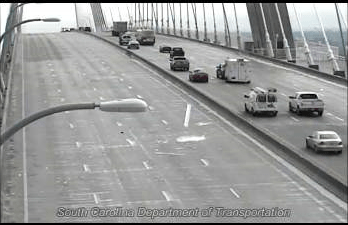 According to Mount Pleasant Police, the Ravenel Bridge has been shut down because large chunks of ice have been falling from the cables.

ABC News 4 says multiple people have told the station that their cars were damaged due to falling ice. You can see a picture of a car damaged by the ice here. A Charleston Police Department spokesman said some ice also fell in front of a Mount Pleasant Police unit.

One motorist was reportedly injured by shattered windshield glass.

A producer at Live 5 News Tweeted the picture on the right, which shows ice on the road.

ABC News 4 has some raw video of the ice falling.

Charleston Named One of America’s Most Romantic Cities