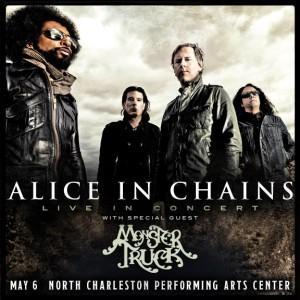 Alice in Chains, one of the most popular bands to come out of the grunge era, will play the North Charleston Performing Arts Center on Tuesday, May 13th, 2014 at 8 pm.


The rock group is probably best known for their 1992 hit, “Man in the Box,” which originally appeared on their debut full-length album Facelift.

Despite the deaths of the group’s original lead singer Layne Staley (2002) and bassist Mike Starr (2011), Alice in Chains has continued to tour and have success. William DuVall has taken over vocal duties, while Mike Inez now plays bass. The current lineup is responsible for the band’s last two albums, including 2013’s The Devil Put Dinosaurs Here.

An internet pre-sale for the show begins Thursday at 10 am and will run until 10 pm. You will need to use the password “STONE” (no quotations), to take advantage of the pre-sale.