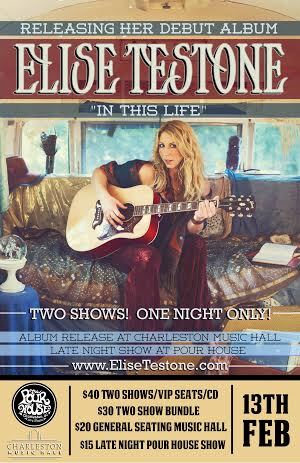 Local singer Elise Testone will celebrate the release of her long-awaited debut album, In This Life, with not one, but two Holy City events on Thursday, February 13th, 2014. She will perform at the Charleston Music Hall before heading to the Pour House for a late night show and after party.

Many Charlestonians have been waiting for Testone’s debut album since before her appearance on American Idol in 2012. Her inclusion in the singing competition only increased anticipation throughout the city, so it’s no surprise that Testone will turn February 13th into an all-night celebration.

The evening begins at 7:30 pm with the official album release concert at the Charleston Music Hall. The late night show and after party kicks off at the Pour House beginning at 10 pm.

There are a few ticket options:

In This Life will be released two days beforehand, so fans will be able to hear her new material before the local concerts. The album was recorded in Charleston and features local musicians and Erika Van Pelt, a fellow Idol alumnus. The first single, “I Will Not Break,” is already available on iTunes.