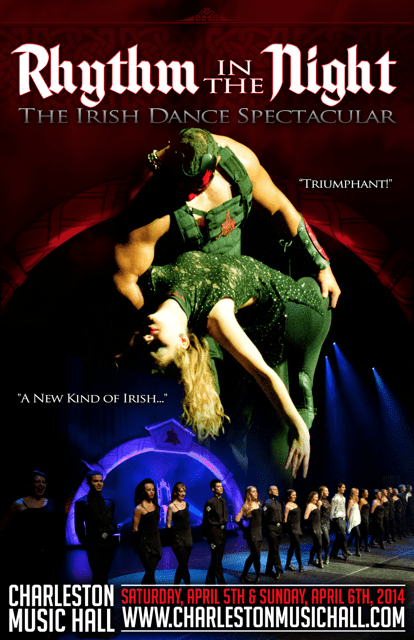 The Charleston Music Hall has announced that “Rhythm in the Night: The Irish Dance Spectacular” will be at the venue on both April 5th and 6th beginning at 7:30 pm.

The Charleston Music Hall describes “Rhythm in the Night” as:

“an epic journey derived from a tale of good versus evil where deception reigns and temptation rivals the strongest of wills. The story unfolds during the dark ages when the wicked seductress Azura has trapped the legendary hero Balor under her control with a spell forcing him to command her legion of relentless henchmen. Unable to free himself, hope remains lost for all those in the kingdom…until now.  In a final attempt to rescue their leader, the people have called upon Balor’s loving companion, Aisling, along with his younger brother, Solas, and their knights to release him from Azura’s spell and restore peace to the divided kingdom. As the storm rolls in and the lightning crashes, redemption will rise from the shadows in the legend that has come to be known as Rhythm in the Night.”

Ticket prices are as follows:

Tickets can be purchased by clicking below:

Follow us
Related Topics:charleston music hallrhythm in the night
Up Next

Bay Street Biergarten Presents “Gatsby at the Garten” This NYE