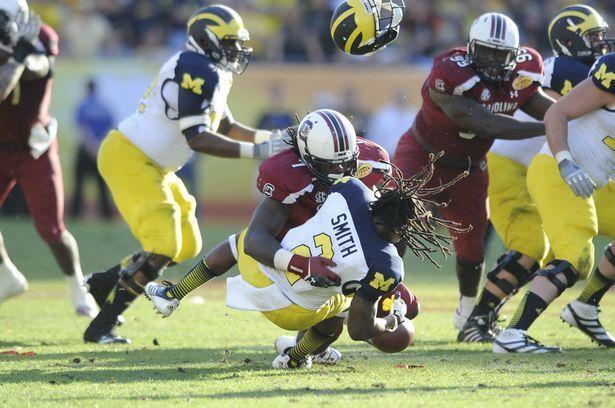 UPDATE: 12/10/13 – According to the Post & Courier, Clowney wasn’t the other in-state football star to be caught speeding. Clemson quarterback Tajh Boyd was given a warning on Friday for driving 84 mph on Interstate 20 in Kershaw County.

Each Saturday this fall South Carolina defensive end Jadeveon Clowney has shown some impressive speed on the field, but this past Saturday it was his acceleration OFF the field that is drawing headlines. According to WCBD, the junior was given a ticket for going 100 mph in a 70 mph zone on Interstate 77.

Clowney was ticketed and charged with speeding.  It is a 6-point speeding violation.

Highway Patrol tells News 2 anything over 25 mph the speed limit is considered reckless and Clowney could have been arrested.

Clowney was driving a Chrysler 300 and was cooperative with law enforcement.

I’m glad to see Clowney is going full-speed in at least one aspect of his life. Heeeeeyooo! In all seriousness, if this is the only “trouble” Clowney gets in during his college (and soon-to-be professional) career, then fans have very little to worry about.