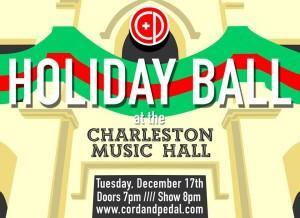 The Charleston Music Hall announced the return of Cord and Pedal’s Holiday Extravaganza for Tuesday, December 17th at 7 pm.

According to a press release from the venue:

The Cord and Pedal Holiday Ball is a tradition that began in 2002 at the original Cumberlands. It was a very impromptu gathering of local musicians, artists, and fans.  The idea was simple: perform holiday themed music in a festive atmosphere. The event grew in scope and evolved thematically with each passing year.  It’s been hosted at Cumberlands (both locations), The Map Room, The Music Farm, The Pour House, and the Tin Roof.  At it’s core, it’ a night for local artists to put aside their own acts and join with others to create something truly special. Rarely does one get to see members of some of Charleston’s bigger acts (Band of Horses, Shovels and Rope, etc.) playing alongside veterans of the Charleston musical community, as well as members of its rising class.

Some other musicians likely to make appearances include: Rachel Kate, Jordon Igoe, Lindsay Holler, Kevin Hanley, Elim Bolt, Run Dan Run, Nick Jenkins, Brave Baby, The V-Tones, The Specs, Jason Groce, Jeremy McLellen and probably a lot of other people (fingers crossed for Scott Dense).  Above all else, it is a night full of surprises – for the audience, for the performers, and even the event’s organizers.