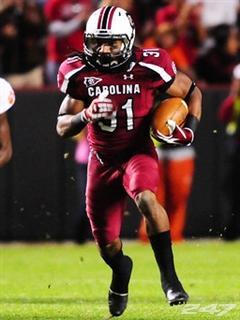 UPDATE: 11/12/13, 3:15 pm – Police announced today that Miles will be charged with filing a false police report after they determined he shot himself.

UPDATE: 11/5/13, 1:28 pm – If you thought it was kind of fishy that Miles did not want 911 to be called after he was shot, your suspicions appear to be warranted. Richland County Sheriff Leon Lott told reporters today that Miles was not shot during a random robbery, but would not elaborate. A couple media outlets are saying drugs were likely involved.

UPDATE: 5:09 pm – WLTX is reporting that Miles is now in stable condition.

According to media reports, former University of South Carolina running back Kenny Miles was shot today near Columbia. Steven Dial from WLTX tweeted that Miles is “in critical condition…life threatening condition at this time.”

It appears the suspect who is accused of shooting Miles was trying to take his championship rings and money when the shooting occurred.

Miles finished his career at South Carolina with 1,341 yards and 5 touchdowns. He graduated in May.