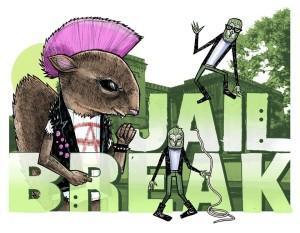 The Jail Break Music & Arts Festival has announced that it’s next event will be held on Saturday, November 16th at the Old City Jail. The sixth edition festival is scheduled to run from 4 pm until 11 pm.

Along with the official date being announced, the theme, music lineup and comedy acts have all been revealed.

This year Jail Break will resurrect the spirit of punk by celebrating the “unabashed expression, commitment to the do-it-yourself lifestyle and passion-driven rebellion” of that subculture. The event will feature the first original, collaborative performance in its history with “Punk: Art Untethered, an In-Your-Face Interface of Movement, Light and Sound.”

The bands slated to perform are:

Tickets are only $10 throughout the month of October, but jump to $15 after that and $20 at the door. Tickets can be purchased online or at these locations: King Dusko, Artist and Craftsman, Redux Contemporary Art Center, Artisan Tees, and Dancefx.