This Day in Charleston History 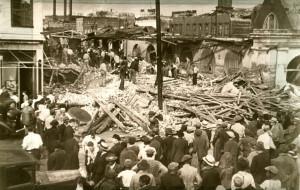 On this day in 1938, the Lowcountry was ravaged by a series of 5 tornadoes. Three of those twisters struck James Island, downtown Charleston, and Sullivan’s Island, while the other two hit outside of the Holy City. According to National Weather Service, the events were made worse by “higher than normal tides and heavy rains overnight, resulting in significant street flooding.”

The first twister hit the peninsula around 7:50 am near the Ashley River Bridge. The second swept through James Island at 8 am before crossing the Harbor and raking The Battery, Market, Broad, Calhoun and East Bay Streets. 27 fatalities resulted from the second tornado alone. Many of the dead consisted of entire families. The third twister nailed Sullivan’s Island around 8:30 am.