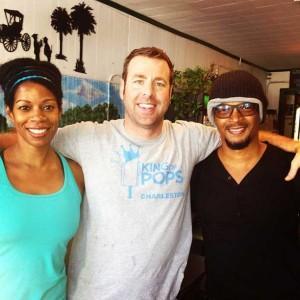 Damon was likely in town to visit his sister who is currently filming Reckless. The CBS drama has been filming in the Holy City over the last few months. Plus, the two are familiar with Bouton.

An astute reader pointed out that Bouton has a recurring role on Second Generation Wayans – a television show that airs on BET. The show also stars Tatyana Ali (The Fresh Prince of Bel-Air) and Damon and Kim’s nephew Damien Dante Wayans and their cousin Craig Wayans.

You may remember Damon from television shows like My Wife and Kids and In Living Color. He also starred in films like Bulletproof, The Great White Hype, Major Payne, Mo’ Money, and The Last Boy Scout.

Kim also starred in In Living Color, plus had roles in A Different World and The Wayans Bros.