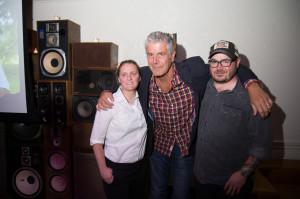 If you haven’t already heard, Chef Sean Brock will be one of the stars during the upcoming second season of Mind of a Chef.

The James Beard Award winning PBS series from Anthony Bourdain’s production company, will debut at various times throughout the country. The Holy City won’t see the show until October 17th. There will be 16 episodes of the series, half of which will be dedicated to Brock, the remaining to British chef April Bloomfield.

The premiere party was held this past Thursday and a bunch of photos were put up on TUMBLR.

While the Holy City waits for the show to debut in our market, take a peak at the teaser clip below. It details Brock’s visit to Prince’s Hot Chicken in Nashville.