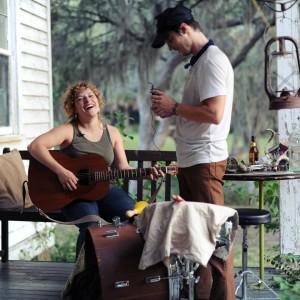 “Beginning 8/28, we will release a new movie teaser or dropped scene every Wednesday until the release of The Ballad of Shovels and Rope. That’s right, you’ll get to see exclusive, never-before-seen video every damn week, so stay tuned, ok?”

Shovels & Rope, which consists of Cary Ann Hearst and Michael Trent, has had an incredible 12-month stretch – the band released their debut album last July, won the Charleston City Paper‘s Album of the Year Award, dominated the American Song Writer’s lists, opened for the Dave Matthews Band this summer, appeared on The Late Show with David Letterman, recorded with Jack White, and received four nominations in at the Americana Music Association’s 2013 Honors & Awards ceremony.

All of that should make for an intriguing film. For now, you can view the first teaser trailer below.