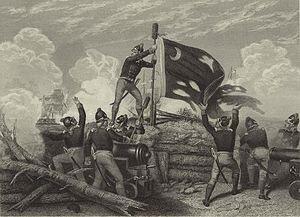 The South Carolina Historical Society, the Palmetto Society and Fort Moultrie all have events scheduled for today’s celebration of Carolina Day.

This somewhat obscure holiday commemorates the state’s first decisive victory of the Revolutionary War. The Battle of Sullivan’s Island was won by a group of Patriots from South Carolina when they defeated the British Royal Navy near present day Fort Moultrie on June 28th, 1776. The fight also served as a critical moment in the history of the state flag.

To commemorate the anniversary, Fort Moultrie will have activities, demonstrations and reenactments throughout the day. Festivities begin at 10 am.

Also at 10 am – a Carolina Day Service will also be held at St. Michael’s Church on Broad Street. That will be followed by the Carolina Day Parade at 11 am. The parade route runs from Washington Park to White Point Gardens. There will be a wreath-laying ceremony at the conclusion of the procession at the Jasper Monument.