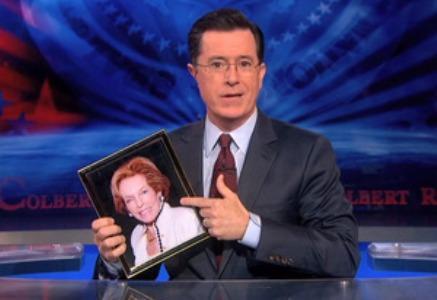 ***UPDATE, 6/20/13***: Stephen Colbert said an emotional farewell to his mother on last night’s Colbert Report. You can watch the clip at the bottom of this entry.

The Holy City’s thoughts and prayers are with Elizabeth Colbert Busch,

Stephen Colbert and the rest of their family after the death of their mother Lorna Elizabeth Tuck Colbert.

Mrs. Colbert, a long-time Charleston resident, passed away on Wednesday at the age of 92.

In lieu of flowers, the family asks that donations be made to Medical University of South Carolina Foundation for the Dr. James W. Colbert Endowment Fund: MUSC Foundation, 18 Bee Street, MSC 450, Charleston, SC 29425, or www.musc.edu/giving.

The endowment fund is named in honor of Mrs. Colbert’s husband who was MUSC’s first provost and vice president. The education center and library at the school is also named after him. He died, along with two of his sons, in a 1974 plane crash.
—

The Lumineers and Roddy White Stop by The Alley