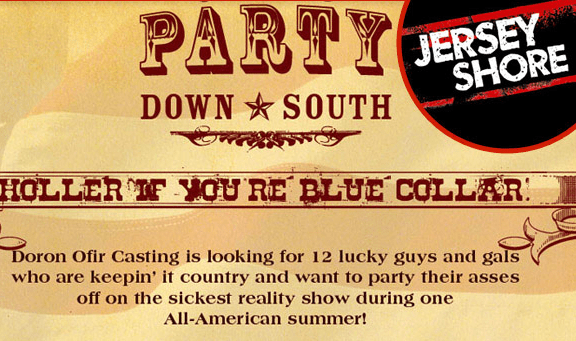 The reality TV industry has a stranglehold on the Holy City. It seems a new production pops up every week. Thankfully, the latest project won’t necessarily feature Charleston, but it could. The new show comes from the same companies responsible for Jersey Shore, so we should all pray no one from this area is chosen.

On its website, a casting agency says they are currently searching for the “proudest Southerners who are at least 21 years old that are ready to show the world they’re country strong” for a show called Party Down South.

After mentioning things like kegs, Daisy Dukes, country music, red solo cups and such, they go on to say:

A few lucky guys and gals will get the opportunity to star in a new television series, kick up their boots and spend one sizzling summer showing America how to really party down South!

Interested parties are then told to “Git ‘er done and apply now!”

I couldn’t have rolled my eyes any harder if I tried.

Sadly, the folks who handle extra-casting for Army Wives, posted about the auditions on their Facebook page. With nearly 8,000 likes on their page, you can guarantee some Charlestonians will apply. Let’s just hope they don’t make the cut.

Follow us
Related Topics:party down southreality tv show
Up Next