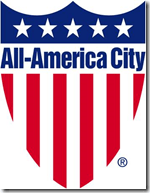 The “Edge of America” has been named a finalist in the National Civic League’s All-America City competition. The winners will be announced at the conclusion of the awards ceremony weekend being held from June 14th until the 16th in Denver.

According to the organization’s official website, The All-America City competition is “our nation’s oldest and most prestigious community recognition award…honoring local action through community-based problem-solving and civic engagement efforts.” This year’s focus was on initiatives that honor and benefit veterans and military families.

Folly Beach is hoping to be one of the ten cities from the pool of 20 finalists to be given the All-America City designation.

Since the competition’s inception in 1949, twelve South Carolina cities or counties have earned the All-America City honor. That list includes Charleston (1978) and Mount Pleasant (2011). Some of you may have seen The Holy City’s All-American City road sign along I-26.