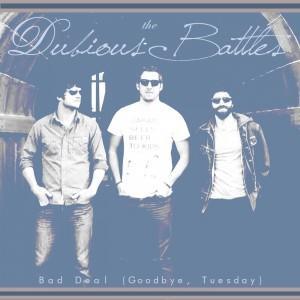 Three local musicians are shedding their frontman status to share the spotlight together at this year’s Jail Break. To celebrate this collaboration the trio recently released their first song.

The group, dubbed The Dubious Battles, is made up of Charleston songwriters Ryan Bonner, Luke Cunningham and Tyler Mechem. Each is or was a member of popular local bands and they have worked together previously.

As for their current project, the group plans on performing/releasing music that is made up of original compositions, and unreleased solo material and popular songs from each members’ repertoire.

The band just released their first single, “Bad Deal (Goodbye Tuesday),” and it is only available on iTunes. You can download the track here.

As previously mentioned, you can also catch The Dubious Battles at Jail Break. Tickets are available here.