“The fire was so big, it could be seen from the Ravenel Bridge” 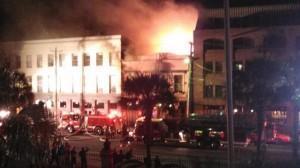 The fire reportedly started around 1 am on the roof of 213 East Bay Street. At one point the roof of the building completely collapsed into the second floor. Thankfully, no one was hurt in the blaze or collapse, but several businesses at and around that address were affected.

It appears The Brick, Light, the Speakeasy, and Squeeze sustained the most damage, while Mac’s Place and Wet Willie’s were also involved to a lesser degree. As the day goes on, more details about the damage to each entity should emerge.

For the foreseeable future East Bay from Cumberland St. to Market St. will be shut down to traffic.

The cause of the fire is under investigation.

You can view pictures of the fire and its aftermath here.

***UPDATE, 12:24 pm***: The Charleston City Paper was told by Charleston Fire Marshal Mike Julazadeh that the “building at 213 East Bay St. was not equipped with fire sprinklers or alarms.”

***UPDATE, 2:15 pm***: During a press conference, Mayor Joe Riley said the building will not need to be demolished and traffic on East Bay Street should reopen by mid-afternoon.

***UPDATE, 3:51 pm***: Only the NORTHBOUND lane of East Bay Street between Cumberland and Market Streets is now open. The southbound lane, which is closest to the buildings, is still closed. I first saw this on a Live 5 News employee’s Twitter account.

Also, the investigation into the fire’s cause has been delayed until tomorrow.

For more information keep checking back here and view these:

Even More Press for Charleston