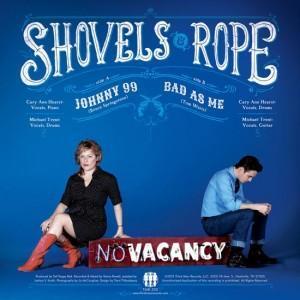 ***UPDATE, 3/29/13*** – Monster Music & Movies in West Ashley announced that they are will be the only store in the country selling the ultra-limited tri-color vinyl pressing

There is some exciting Shovels & Ropes news today!

The label’s official website says of the Blue Series:

Singers and bands that are traveling through Nashville are invited to stop by to record one or two songs at Third Man Studio to be produced by Jack White.  The songs are then, as soon as possible, made available on 7” vinyl and digitally on itunes. The cover photos are taken in third man’s “blue room” photo studio/live venue.

For their release, Shovels & Ropes covered Bruce Springsteen’s “Johnny 99” and Tom Waits’ “Bad as Me.” You can hear their take on the former’s tune at the end of this piece.

The singles will be released on April 2nd. At that time you will be able to preview/purchase them on iTunes. To purchase the vinyl version of Shovels & Ropes release, click here.

You can see every release in the Blue Series here.

October will Bring Michael McDonald to the PAC