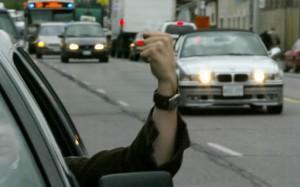 Welcome to Jerk of the Week – a feature I started because, well, there are a ton of jerks out there. To see the previous jerks, click here.

This edition of Jerk of the Week is a little different than normal – this time you can decide who the biggest jerk is. After watching the video I thought the answer was clear, but the YouTube comments were split. So you can decide!

This video has garnered plenty of attention over the last two days and has even popped up on Live 5 News and the Post & Courier’s respective websites.

The P&C had this to say:

Chad Walton…(said) he was traveling on I-526 Monday…behind an Onslow County Sheriff’s cruiser. He said the cruiser was going about 50 mph in the left lane, so he flashed his lights at the car in hopes he could pass, Walton said.
“He was holding up traffic,” Walton said. “I flashed my high beams at him. I could see him yelling at me in the side view mirror.” That’s when Walton said he began recording the cruiser.

Live 5 News picks up the story from there:

When the road opens to three lanes, you see Walton pass both vehicles on the right.

As the road narrows back to two lanes, Walton shifts over to the left, prompting the deputy to pass him on the right.  Then, the deputy suddenly drifts over in front of Walton and slams on brakes, causing the vehicles to strike.

North Charleston police ruled the deputy at fault for the accident but did not issue a citation.

For me, the jerk is DEFINITELY the police officer, but some yahoos on YouTube say otherwise. It appears the officer (Deputy Craig Culpepper) agrees with me as ABC News 4 is reporting that he resigned today.

Watch the video below and decide for yourself (for those of you at work, the video has some cursing at the end).

Follow us
Related Topics:jerk of the week
Up Next

County Encourages You To Turn Off Lights