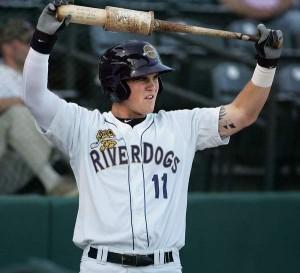 The New York Yankees announced that two former Charleston RiverDogs had won team awards. Outfielder Tyler Austin (left) and pitcher Mark Montgomery were named winners of the Yankees’ 2012 Kevin Lawn Award as the team’s minor league “Player of the Year” and “Pitcher of the Year,” respectively.

According to a press release from the RiverDogs, Austin led all Yankees minor league hitters in batting average for the second consecutive season, ranked third in RBI and fourth in stolen bases.

Austin has been through a lot in his short tenure within the New York organization, but it probably doesn’t compare to what he went through as a teenager. At the age of 17 Austin was diagnosed with testicular cancer. The New York Daily News ran a profile on Austin which details his battle against the disease and his rise within the Yankees organization. You can read it here.

Montgomery spent part of 2011 in Charleston and split the 2012 season with Single-A Tampa and Double-A Trenton. He led all Yankee minor leaguers in saves.

OF Marcus Thames (NOR)

1B Nick Johnson (NOR)

Carrier Classic: One and Done in Chucktown