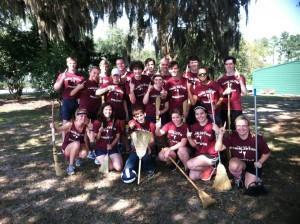 The College of Charleston Quidditch team is in need of some modest funds in order to attend World Cup VI in Kissimmee, Florida.

Yes, Quidditch, as in the made-up sport in the Harry Potter novels and movies.

The school’s team debuted in 2009, but is not officially recognized as a club sport by the school, which means the squad has to come up with a lot of their own funding.

The team needs money in order to pay for the expenses involved with attending the World Cup, which takes place on April 13th and 14th.

If you’d like to donate to the team, click here. Also, be sure to check out a video of them playing below.

Party with a Purpose