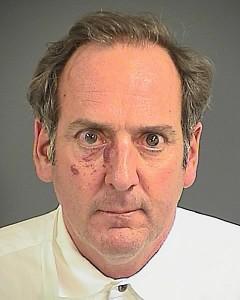 I’ve decided to start a new feature called the Jerk of the Week because, well, there are a ton of jerks out there. To see the previous jerks, click here.

This week was no contest thanks to some (alleged) boozy shenanigans from this weekend.

As previously mentioned, Mount Pleasant Town Council member John Burn was arrested on suspicion of DUI this Saturday night after he rear-ended a car on Coleman Blvd.

Driving drunk and also hitting a car in the process are reason enough to be labeled a jerk, especially if you are a councilman, but what Burn did later on is what elevated him to Jerk of the Week status.

According to the full police report, Burn tried to give the police officer his town council business card instead of his license when asked for ID. Further suspicion was aroused due to Burn’s slurred speech, his wine-stained shirt and his potent alcohol smell.

After failing the field sobriety tests, it was time for Burn to visit the pokey. Once there he apparently asked to speak with the Chief of Police to “speed up” the process.

Looks like we’ve got another good ol’ boy trying to preserve his image. I applaud the police for not letting this get swept under the rug and holding Burn to the same standard as any other person who (allegedly) broke the law.

Sorry Burnsy, but trying to play the status card (if a councilman really has that much status anyway) didn’t help your case and just made you look like a bigger jerk.

Follow us
Related Topics:jerk of the week
Up Next