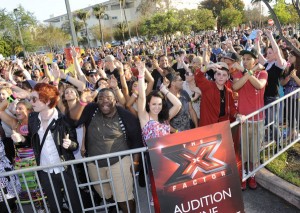 Holy City Sinner was the first local outlet to report that The X Factor would be holding auditions for its upcoming third season in Charleston, but details were sparse at that time. However, many more details are now available about the Fox reality show’s Holy City stop.

If you think you have “The X Factor” be sure to clear your schedules on March 19th, because the nationwide search for the best undiscovered talent will be at the North Charleston Coliseum for auditions. Registration for the auditions will take place at the Coliseum on March 17th and 18th. Wristbands will be issued to performers during that time. You can find more details about registering on the official website. FYI – Auditions are open to solo artists and vocal groups who are ages 12 and over.

Expect even more details about the audition to be released in the coming weeks.

Worldwide (versions of the show are in 40+ territories), The X Factor has created global superstars such as Leona Lewis, One Direction, Cher Lloyd, Olly Murs, Little Mix and Rebecca Ferguson.

Former judges Britney Spears and L.A. Reid left the show after this past season and have yet to be replaced. Currently, Simon Cowell and Demi Lovato are the only judges.

***UPDATE, 2/19/13*** It appears you can add Khloe Karadashian to the list of former X Factor personalities.  No word on who, if anyone, will replace her ahead of the Charleston audition.

Many Bands Fight for Your Love Tonight