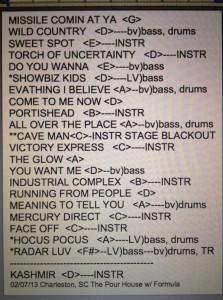 Although the concert was indoors, attendees had to deal with plenty of rain on their way into the the Charleston Pour House last Thursday. You could forgive them if they arrived in a sour mood.

By the time TR3 took the stage though, you wouldn’t have known some were bumming out about the night’s weather just minutes earlier.

Everyone was rocking out with the funky North Carolina trio as they rifled through a packed setlist.

As usual, the center of attention was singer and guitar virtuoso Tim Reynolds. The frontman is one of the most underrated guitarists out there. He is incredible.

Although Reynolds tends to have the most eyes on him during any given show, drummer Dan Martier and bassist Mick Vaughn are tough to ignore. They both play with a lot of energy and, in Vaughn’s case, humor.

The show featured plenty of the band’s better known tunes – “Do You Wanna,” “Face Off,” and “Hocus Pocus” – plus a guest appearance by Matt Hoggard of Formula. Hoggard’s group opened the show with a nice mix of original songs and covers.

If you have never seen TR3 play, you are missing out on one of the most fun live bands that are out there!

The complete setlist to the show, which you see above, was provided by TR3’s road manger.

The Black Keys & The Flaming Lips Coming to Simpsonville