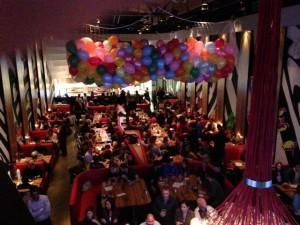 Mellow Mushroom’s Beer Club Super Bowl party was held at their Avondale location this past Sunday and it was a doozie. The party is only open to Mellow Mushroom employees and Beer Club members. Although I haven’t reached the 100 beer plateau,  I was able to sneak in under the “media” designation. Thankfully, I was not expected to behave as such and could enjoy the party just like everyone else.

The place was packed and everyone was already having a blast when I arrived around 6:30 pm. There was an open bar, so everyone was feeling pretty good from the get-go. As usual, Mellow had plenty of tasty brews on tap. I tried three new beers, which I really enjoyed – Goose Island’s 312 Urban Wheat, Dogfish Head Chicory Stout and some kind of Brandywine which I can’t remember the name of.

Butcher & Bee catered the event and they had some sandwiches, nachos and delicious wings available. My favorite where the jerk wings. I don’t know for sure if that’s what they were, but it reminded me of jerk chicken and it was awesome.

The party really took off at halftime. People started dancing on tables and really letting loose while Beyonce 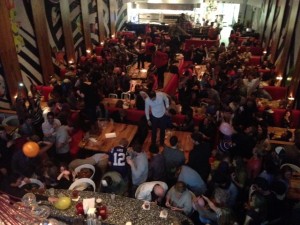 performed. Once the official show was over, a bunch of balloons fell from Mellow’s ceiling and onto the party-goers. Inside the balloons were gift certificates and other goodies so there was a lot of popping for the next few minutes.

When the lights went out at the Superdome, someone threw on music and the place turned into a mini dance hall. It was a blast. Ms. Holy City Sinner seemed to have had a great time also.

If you are not already a member of the Beer Club, you need to be. Besides the opportunity to attend the awesome Super Bowl party, you get rewarded for trying a wide-variety of great beers. For more information and/or to sign up, click here. 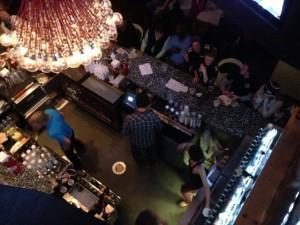 If you’d like to get more jealous of all the fun I had, you can see some of the professional photos Mellow Mushroom had taken here and here.

Christina over at Hungry Meets Healthy was also in attendance. You can read her review here.