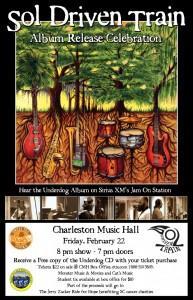 The road warriors in Sol Driven Train are about to be very busy.

The Charleston band will release their latest album, Underdog, tomorrow (2/5/13) and then take off on a spring tour two days later.

The new album should be available via iTunes and Sol Driven Train’s website tomorrow. For now, you can read Grateful Web’s review here.

Starting on the 7th, the band will travel throughout the Southeast and Gulf Coast and even open two shows for Tim Reynolds and TR3 in Florida.

The crowning moment will probably be when the group returns to the Holy City on February 22nd to play the Charleston Music Hall.  The show will serve as their hometown album release party and should be a blast. Everyone who attends the show will receive a copy of Underdog.

A portion of proceeds from the Chucktown show will go to benefit the Jerry Zucker Ride for Hope charity.