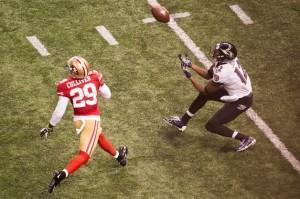 Culliver continues to be a step behind everyone else

I’ve decided to start a new feature called the Jerk of the Week because, well, there are a ton of jerks out there. My first Jerk was Charles Karesh and for week 2 it’s…

Culliver is currently a cornerback for the San Francisco 49ers. He does have a local tie-in though – he played for the South Carolina Gamecocks before being drafted in 2011.

Culliver’s bad week started on Wednesday during a Super Bowl press event. In an interview with comedian Artie Lange, Culliver was asked different questions about having a gay teammate. He responded by saying things like:

No, we don’t got no gay people on the team, they gotta get up out of here if they do.

Can’t be with that sweet stuff. Nah…can’t be…in the locker room man. Nah.

He managed to “apologize” the next day, but it was anything but heartfelt. He was sorry that people were mad at him, but he clearly was not sorry for what he said. He manged to say things that made no sense like:

It was something that I thought, but definitely not something I feel in my heart.

Then why did you repeatedly say it when asked follow-up questions? It’s one thing to slip-up once, but it’s quite another to continue hammering home your “slip-up.”

Yahoo! reported the following about his “apology”:

And when he was asked if he would support a gay teammate, Culliver paused — a silence that seemed to speak volumes — and managed a lukewarm “If it is … it is. We’re all treated equally in the locker room.”

Then came last night’s Super Bowl and Culliver did not play well. The Ravens repeatedly targeted him and although he knocked away two passes, he was beaten on multiple occasions.

Having a bad game doesn’t add to him being a jerk, but his comments afterwards do. Instead of taking responsibility for his poor play, he pouted, blamed the officials, and tried to talk up his stats. He told the San Francisco Chronicle:

Sometimes, the referees see what they want to see. A lot of these referees are biased and have a big impact on the game.

When asked if he thought the Ravens were specifically targeting him, he responded with:

I didn’t care. How many pass breakups did I have?

Wow. His lack of maturity is astounding.

Chris Culliver, you made my choice for Jerk of the Week an easy one.

The Lowcountry Highrollers Need Your Help